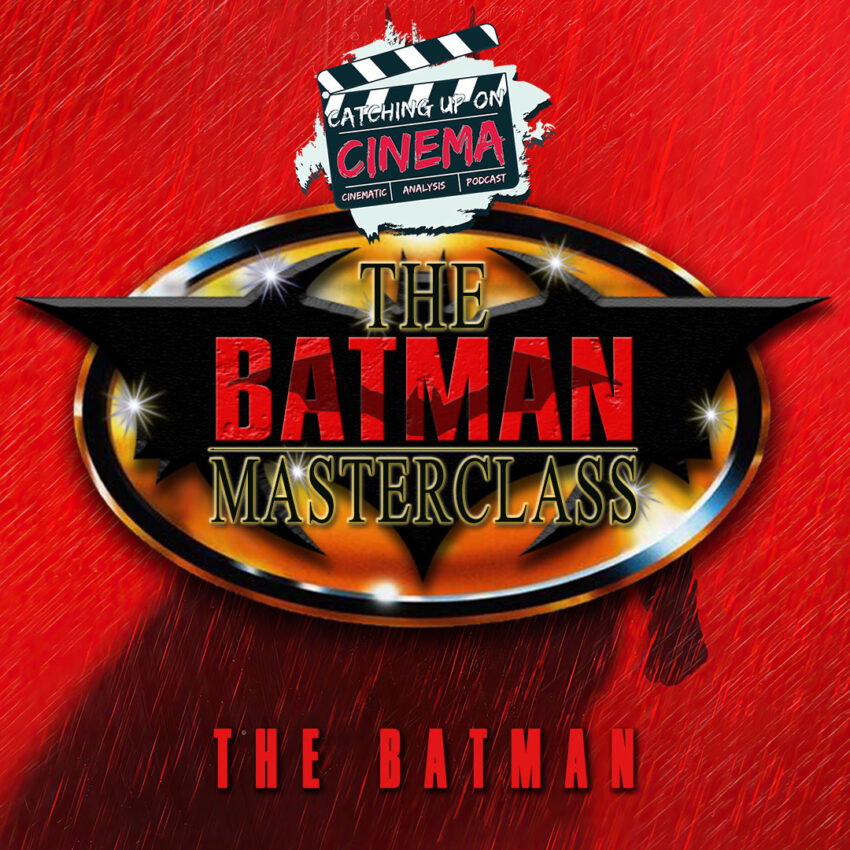 This May is “Masterclass Revisited” month at Catching Up On Cinema!

All month long, we’ll be revisiting the subjects of Masterclass months we’ve done over the years to review films that may have slipped through the cracks.

This week, we’re once again hitting the streets of Gotham City to review Matt Reeves’, The Batman (2022)!

Conceived and produced during the collapse of Zack Snyder and Ben Affleck’s tenure on the franchise and character respectively, The Batman serves as the first of a new trilogy of films to be helmed by director Reeves.

Featuring Robert Pattinson as a Bruce Wayne with 2 years of Batman-ing and fear mongering under his utility belt, Pattinson’s rendition of the character represents the most vulnerable and most obviously traumatized version yet seen on film.

Also featuring Zoe Kravitz as Selina Kyle/Catwoman, Jeffrey Wright as Lt. Jim Gordon, Andy Serkis as Alfred Pennyworth, a nigh unrecognizable Colin Farrell as The Penguin/Oswald Cobblepot, and Paul Dano as The Riddler, the film boasts strong performances all around, with lead Pattinson surprisingly occupying the majority of the film’s screen time.

Nearly 3 hours long, The Batman is a complexly structured film, rich with themes, ideas, and beautiful imagery, but seemingly designed from the ground up to be frustrating in it’s pacing and plot progression.

In spite of its incredible arsenal of themes and social commentary, the film boasts enough popcorn entertainment sequences to please general audiences, though it’s fair to assume its equally incredible run time could be a bridge too far for some.

Potentially the most explicitly political and thought provoking of Batman films, Reeves’ tenure on the character, much like his run on the Planet of the Apes franchise, seems to be defined by delivering spectacular imagery, while favoring the demands of the character and narrative over that of audience expectations.

Dark, brutal, and completely unwilling to be as dumb and simple as we occasionally expect super hero movies to be, The Batman may not yield pure entertainment with a casual watch, but if you’re in the mood to chew on a few riddles in order to get to the juicy center of the matter, you’ll find yourself handsomely rewarded.